It’s all fun and games until someone gets hurt

Running down the field as fast as you can, the last thing on your mind is having a season ending injury that could make you sitting on the bench instead of standing in the spotlight.

Sadly this does happen and maybe to too many student athletes. High school sports can be very dangerous and without the right protection, could be deadly.

Football is the number one sport for high school injuries.

Last year there was 1,361,986 injuries in high school football, with an average of 12 deaths per year.  Eight people have died this year alone.

There is a 75% chance for a player to receive a concussion.  Most of the concussions are due to head to head contact in plays. If you get a concussion you are more likely to get another.

So what are football teams doing to try and keep players them safe?

No coaching technique can result in safety when the point of playing defense is to crush the carrier. The kids today call it destroying them. With those words describing the hits of course it’s not going to be safe. The game is violent, and people get hurt in violent games.

North high football player Brian Gilmore says “It’s just bad luck, football as a sport is safe enough I just get messed up a lot.” Brian got all of his top ligaments and tendons of his thumb torn. He’s getting surgery Friday Oct., 17, to reattach his ligaments and tighten a tendon. “It feels like a needle constantly stabbing my thumb, still does.” Brian said “I do not recommend it.”

The question still remands what is there to help make all the players safer.

The plastic face mask has become a popular fix for broken noses and other factual bone fractures. It makes you look goofy but they help keep the users face protected.

They are trying a lot but it seems nothing is a solid fix. They have made Better face protection, better helmets, better pads, all over better gear, even better cloths, but kids still get injured. The question may never have an answer. 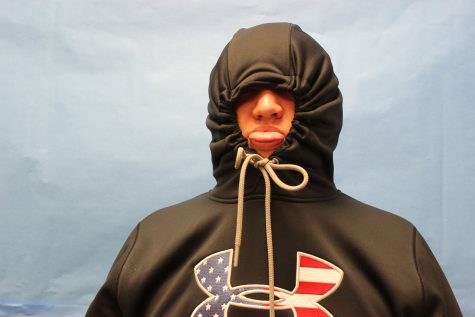