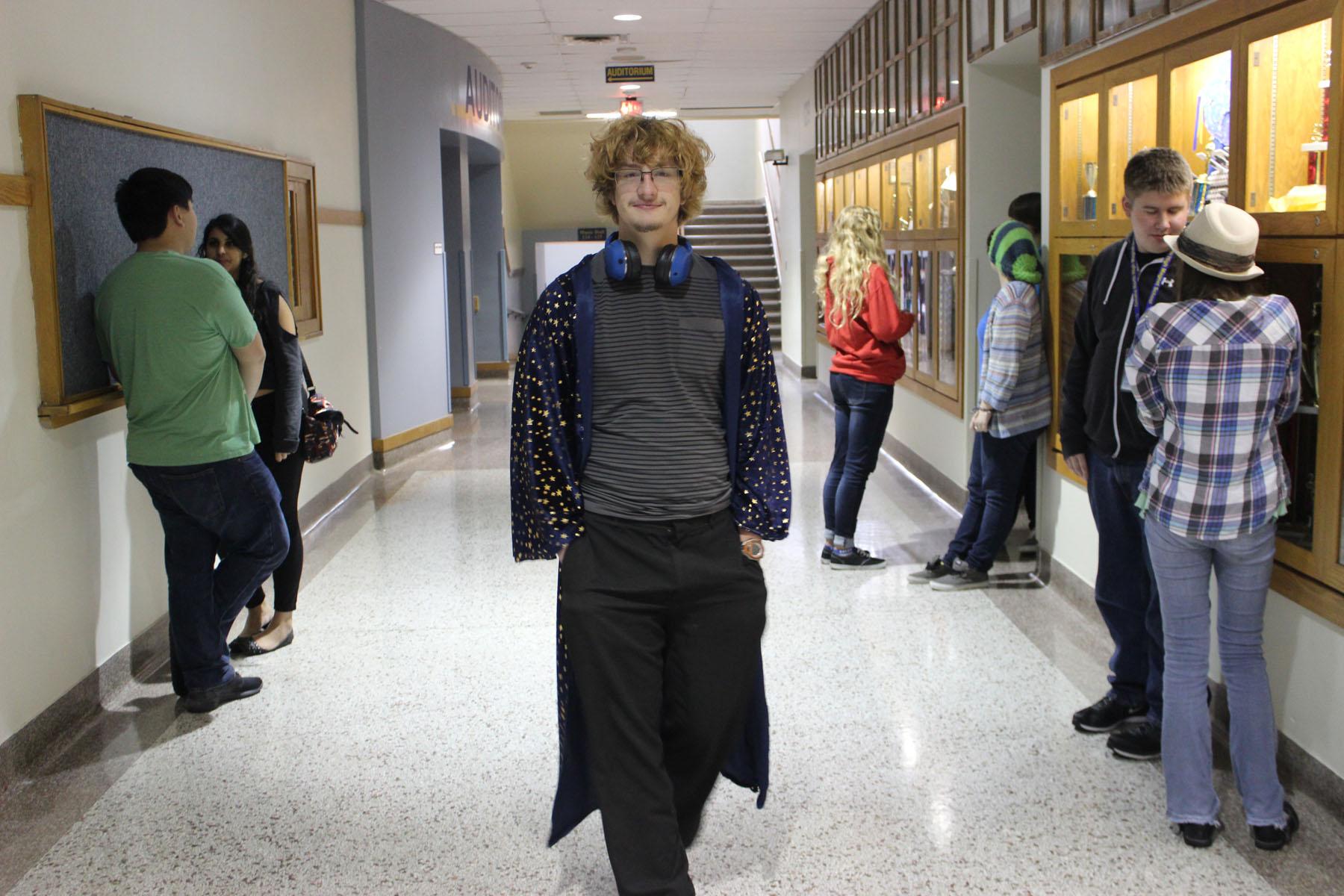 Brandon McConkey: Man behind the cape

He makes his way through the hallway, with his robe drifting slightly behind from catching wind, on his way to class. To most it has become a normal thing.

The whole school sees him, eyes following his path, heads tilted to express their questions without words. He wears it so conspicuously, with his head held high, despite anyone’s critiquing.

“You only know him as the guy with the cape, you didn’t know who he was until I brought up the cape” Kyle Christensen, senior, said.

Omaha North High’s Brandon McConkey, a senior this year, has made an undisputed image for himself as, The “North High Wizard.”

Fellow students were quick to judgement saying things such as “He’s a weirdo,” and “that’s just the doofus with cape”. McConkey’s peers know of him, and that he wears a wizard robe, but they have not the slightest clue what his story is about.

“It would be nice for people to know me for more than just the robe,” McConkey said

McConkey like others, has his own interests and hobbies. He enjoys hanging out with his friends and spending time with his family, and video games.

He runs a carpool with his friends.

“I don’t mind giving my friends rides, I like driving. I have a van and it’s like, if no one is in here then it feels lonely.” McConkey said.

McConkey spends majority of his time with those friends. His friends all share the same love for video games as him luckily. Countless hours of the video game Super Meat Boy, Rice Krispies, and Fruit snacks, builds a bonding of friendship like no other.

He is the oldest of three siblings, and he lives with both of his parents. His family is very tight and supportive of one another. They rely on each other, and are always there when in need.

McConkey’s father is a military man, with a bright mind. He scored in the top 10 percent of an army intelligence test, he likes to call himself a “reverse engineer.” For his ability to take things apart to learn about them.

On top of that he worked in the medical field for the Douglas County jail. This was after his service to the military for eight years.

His mom, is a very fit and active person, who at the same time is pretty killer at video games. She also went straight into college out of highschool with a full academic scholarship, and went to be a pharmacist. Now she works at the Walgreens pharmacy in Council Bluffs.

Both parents suffer from Bi-polar, Depression and Anxiety disorder. There is evident qualities from both parents that McConkey displays in himself. McConkey has demonstrated his father’s reverse engineering, and his moms love for video games, but he also has demonstrated the effects of the disorders they have too.

Just a little over three years ago, McConkeys parents, being the supportive people they are, let their neighbor Kevin and his girlfriend live with them temporarily. They needed a place to stay because they couldn’t support themselves alone.

For quite some time, Kevin had been suspecting that McConkey was “hitting” on Kevins girlfriend. McConkey was 15, he had no such intents, but Kevin having such a severe disorder, he was prone to extreme reactions. It started out with just watching and stalking McConkey throughout the house and it only got worse.

McConkey had slightly noticed but not that much of it, until things went to a new level. While McConkey was sleeping, Kevin acquired a kitchen knife and creeped into McConkeys room. He slowly walked towards the bed muttering under his breath, and woke McConkey up by running the blade along his foot and leg, in threats to harm him.

After scaring McConkey, Kevin walked out of the room in the basement and ripped the basement apart, destroying everything in it, leaving it a mess, and fleeing from the house.

“Honestly that had a huge turning point in my life.” McConkey said.

The depression and anxiety really took over after that traumatic event.

“It was like I had lost my grip on my reality, and everything else.” McConkey said.

Being as supportive as they are, the comfort of his parents was there the whole time, but they could only do so much.

McConkey needed, comfort, a way to express himself, when things didn’t feel the same. He needed to be who he was, in a time where he lost himself.

The robe was his safe haven. The robe expressed a part of who he was, when he couldn’t do it himself.

“He wore it everywhere, like it was his jacket, or any other coat.” McConkey’s mom said.

They completely supported his choice of fashion regardless of the reason.

This event having happened some two years ago, has given McConkey a lot of time to find himself and recover. That is why he is wearing the cape less.

Around the time in which this first took place he wore the cape daily, it was when he needed it most. Now he feels that he doesn’t need it as much, because of how far he has come, and how much better things are.

McConkey has never explained the reasons behind his cape until recently in the past few weeks. He is ready for the people to know who he is, and why he wears the robe that the school knows so well.