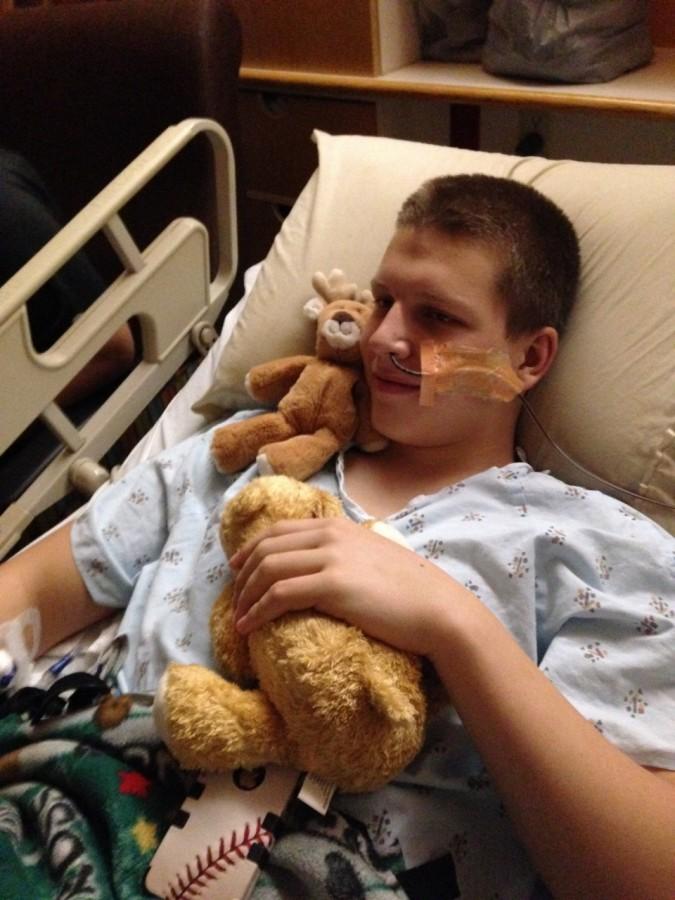 Collin Brown lays in hospital bed after an emergency surgery to remove his apendix. Brown was quickly also diagnosed with a bowel obstruction, causing him to be hospitalized for a month. Photo courtesy of Collin Brown

Brown survives despite near death illness

It was the Saturday before Easter 2015 when Collin Brown, junior at Omaha North High School, first noticed something was wrong. He was at work and having stomach pains to the point where they sent him home.

Arriving home, pain still consistent, he brought it to his mothers attention. The pain only seemed to be getting worse, and next thing he knew his mother was driving him to the hospital, around three A.M. Easter morning.

His diagnosis was appendicitis, his appendix was literally about to explode. Untreated, it could have been fatal, and Collin is lucky they caught it on time.

Appendicitis is inflammation, of the appendix. Due to its location, it can cause inflammation to surrounding organs, like the colon.

Brown had complete obstruction of his appendix which means emergency surgery in order to remove the appendix before it damages anywhere else.

Unfortunately, they weren’t quick enough. It was only 3 days after being released from the hospital that his stomach pain reoccurred.

His second diagnosis was a bowel obstruction, everything he ate he threw up.

“Nothing was filtering through,” said Brown.

Another life threatening diagnosis that required more surgical attention. This time it was a bit more serious. Brown had been told that he could very well be in his last days, his kidneys were failing, and he was close to death.

This severe diagnosis has caused him to not tell a lot of people because he doesn’t want that kind of attention.

Brown was in the hospital for a total of 31 days. From April 4th to May 4th, missing school, and the experiences in-between.

Not only did he miss that month of school, but by the time he was able to come back, it was all finals and tests. Having missed all the material for those tests he was still unable to return to school.

You could say it was an early summer vacation, and you can bet some would agree, but not Collin Brown.

“I really missed school,” Brown said “it was nice being gone from school work.”

Though it may have seemed like a vacation from school, Brown wasn’t enjoying his time away.

“At the point when I was in the hospital I missed everything, because the hospital room was nothing. It may sound weird but I would have traded places with anyone in the school at the time,” Brown said.

Not only was Brown missing school, but school was missing him. John Hjelle is a math and engineering teacher at Omaha North High School and was a teacher of Brown before he got sick.

Hjelle describes Brown as a very engaged student in the engineering classroom, where he taught to him. Brown’s involvement in the class mixed well with his personality which in some cases was quite humorous.

“As you have that class for a longer period of time people start to get to know each other, they start to kind of rely on who’s going to be in there” says Hjelle, explaining how Browns absence was more than just noticed.

Brown’s personality in the classroom was something both Hjelle and the other students in the class missed.

“As a teacher you sort of get desensitized to these kinds of things, but Brown was the first case I’ve had in a while,” Hjelle said.

At graduation in May, while Brown was watching his older brother graduate, Hjelle got to catch up with Brown and see how he was doing.

“As a teacher you start to develop these relationships with students, though they are just in the classroom for the most part, you start to enjoy their personalities,” Hjelle said.

Now that Brown is doing well, Hjelle is glad to see him back in action. He has had plenty of time to recover and is no longer in the hospital and is back at Omaha North High as a junior.

Despite all of the turmoil that has happened in the past year, not much has changed according to Brown.

“I think it brought my family a lot closer. It’s been a while since that type of thing has happened,” Brown said.

Though the doctor didn’t give Brown any medication or any specific precautions, he is urged to be careful with things around the area that was affected.

Brown is permitted to play sports and be the average adventurous high schooler, but Brown feels that he should be more careful, so he restricts himself from various activities.

“My doctor told me that for every day I’m in the hospital, that’s on week of recovery,” Brown said.

Brown has been on the road to recovery for about 17 weeks and is about half way done. Next time you think you’re sick of school maybe you should consider yourself lucky. There may be someone who would be willing to trade you places in an instance.