“When straight people are young, they kind of just know they are straight. They look at the opposite gender and get really happy, shy and excited all at the same time. They don’t yet know why, but they just know that they have a certain connection to them,” Taya Hinton, a sophomore at North High, said.

Hinton has known she was homosexual for as long as she could remember, but she never told anyone right away. She acted as if she were straight to please her friends.

Knowing she was different than everyone else, she didn’t want to proclaim her sexuality to the outside world. She wasn’t comfortable revealing that side of her.

“I waited and waited for that connection with a guy and I never felt it. I felt it with girls, I would get the feeling when I would see girls,” Hinton said.

Hinton could not explain her personal feelings without feeling uncomfortable. She never understood the meaning of sexuality as a young kid. It wasn’t until middle school that she conquered her fear of not being liked, and eventually dated within the same gender.

“As I grew up, I realized more and more what was happening and I learned of the word lesbian,” Hinton said.

Hinton learned to freely express herself through poetry. Poetry was a way that Hinton could disguise her meaning of love and interpret her true meaning of her feelings within her poems. Words became the access point to relate to other people within her same situation.

“I like to write poetry and I would write a love poem and every time I wrote ‘him’ I really meant ‘her’,” Hinton said.

“When I hear someone speak badly about ‘gay individuals’ I will step in and resolve the issue, but that is their opinion on how they view the gay community,” Hinton said.

Hinton is now involved with organizations in Omaha that help children in similar situations as hers. RAD is a club established at Omaha North High, where students address the problems of stereotyping ethnic groups affecting the North Omaha community.

“A lot of people will say coming out to their family was hard. Mine was too. Once I told my family it was really easy and it felt like the weight-lifted off of my shoulder.”

Hinton’s mother was shocked with her daughter’s sexuality and preference. After some time of dealing and accepting her sexuality, Michelle Nathaniels, her mother, is now supportive of her daughter and embraces Hinton’s originality ofb being a proud lesbian.

“It was really different to him, but surprisingly he was really cool about it,” Hinton said.

Hinton is now in different programs to help students feel safe at school and at home. Not wanting them to become victims of bullying, she doesn’t want them to get hurt and is very attentive to students using words that can be used as a double standard to some students, including Faggot, she-he, gay, and homo.

Youth Frontiers is another organization working to help middle school students become diverse within the school environment. In Omaha there are various programs that want to support children not enter a negative environment and feel rejected.

Coordinating within the NOH8 campaign to embrace their qualities and help inspire children to not be frightened to openly describe themselves towards their sexuality.

Hinton is going to take part of the campaign to express her demand for equal rights.

Donating her picture to the committee to sponsor the LGBTQ+ community and spread the word within the Omaha community.

Her picture would focus on her perspective on how she embraced her sexuality. It’s a representation of her story and becoming a delegate for the equal rights.

Omaha North also provides groups to support diversity within the community. Their goals are to help children express their personalities and not feel obligated to hide their true selves.

NoH8 is a charitable organization established within the United States that promotes same sex marriage, and gender to have human equality. They promote their campaign through friendly protests, social media, education and other creative silent protest with photography.

NOH8 is in correlation with proposition 8 in California that was a bill passed to let same sex couples to marry within the state areas. What the campaign features are the duct tape to an individual’s mouth that causes the silence from proposition 8. Propostion 8 was granted in California to provide the legalization of same sex marriages.The NOH8 symbol drawn into the faces of the individuals is the logo for the protest.

In 2014, the campaign has grown from a few hundred followers to 33,000 faces alongside NOH8. Omaha is one target for this campaign, since Nebraska has allowed same sex marriages.

Photographers schedule their shoots within the year to accommodate individuals to become supporters of the campaign and complete an interview to express their stories.

Hinton has a scheduled appointment to have her picture taken to support the campaign with their fight for equality. The organization holds feature stories of participants feeling deprived from their equal rights and their stories on being different, because of their sexuality.

Throughout the photo shoot the team members interview the participants to understand their experiences with the bullying and non-acceptance with equal rights.

“What I recommend for kids that are still trying to find themselves is to take your time. You do not need to know your sexuality tomorrow or even a year from now. Don’t force a label on yourself just to get over it. If you label yourself it may be hard to escape from it.” Hinton said. 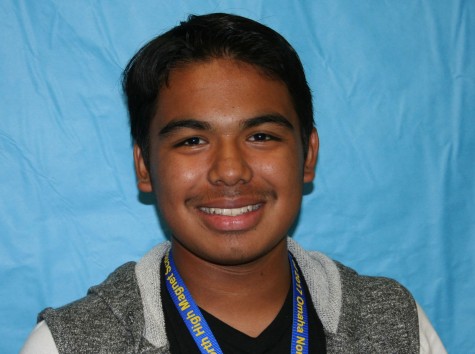 I'm a sophomore who is involved in tennis, R.A.D, Latino Leaders, community service, science club, acting, and other special activities.