Hated it. Having to wake up, go to school everyday, and pretend to be the funny, care-free guy.

He had to watch all of his friends succeed while he slumps around pretending to be as good as them. Jakob Arman just wanted it to be over.

He’d been faking a personality for as long as he could remember. Trying as hard as he could to be funny because that’s what people liked. All Jakob wanted to be was liked by everyone, so he did his best. He told people that he wanted to be a comedian, so that he could be encouraged and convinced that he had a shot at being rich and famous.

All of the things required for him to have a good life seemed out of reach. He didn’t do well enough in school to be a success story, he wasn’t outgoing enough to have a solid love life, and he wouldn’t be recognized for anything in particular. He was all around mediocrity.

His least favorite part of his existence, was knowing that he was going through all of the problems that every other white, middle-class, teenagers had. He knew he was just weaker in every regard to dealing with these every day problems.

There wasn’t anything specific that stopped him from being happy. He wasn’t bullied at all, he wasn’t ugly, and he wasn’t noticeably poor. He was average. That was his “setback”.

He always tiptoed the line between being so good at something that he’d get recognition, or so pathetic at another that he’d get sympathy, and sympathy was what he wanted. Having someone feel bad for him was the best way for him to convince himself that people were there for him to succeed.

He’d accepted that after high school he had a few options. Minimum wage job, homeless, or the most realistic option to him; suicide. Jakob used this as a backup plan or an excuse to ignore his responsibilities. “Well if I screw up in school, I can just kill myself later.”

He tried suicide before. He came home from school one day, determined. He decided that it was a viable option. He wasn’t trying to send a message or a cry for help with this action. He just wanted to be known for something, and decided that trading his life for that something was worth it.

He bought a rope, and found the spot where it would happen. His basement.

He googled “How to make a noose” and after an hour of trial an error he had made one. Jakob stood on the chair, tied up to his new invention, trying to ignore the thought of his grandma finding him hanging later that day.

In this cluster of emotions trying to stop him from doing the thing that he’d thought he’d accepted years ago, he kicked the chair out from underneath him.

He hit the ground pretty hard. The noose wasn’t tied properly to the pipe on the ceiling and couldn’t hold his weight.

He sat there crying for a couple minutes. He thought about trying again, but didn’t feel the motivation. “How could I mess that up?” was all he could think. He was just tired of it all.

He was left with the experience that far too many people have had to experience, but that was comforting to him.

In the end, that idea is what kept Jakob from trying again. Everyone goes through depression. It doesn’t matter how popular, average, or lonely they are.

Even popular guy that you see in the hallway that has everything going for him. He’s going through something.

No one’s life is perfect. So please, don’t make the mistake that I did and pretend that it is. Faking a smile hurts much worse than telling people how you feel. 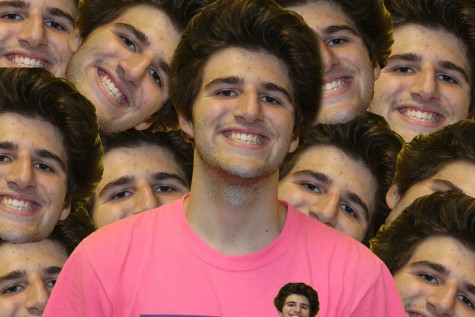 I'm a junior. I'm the greatest soccer player to ever live.