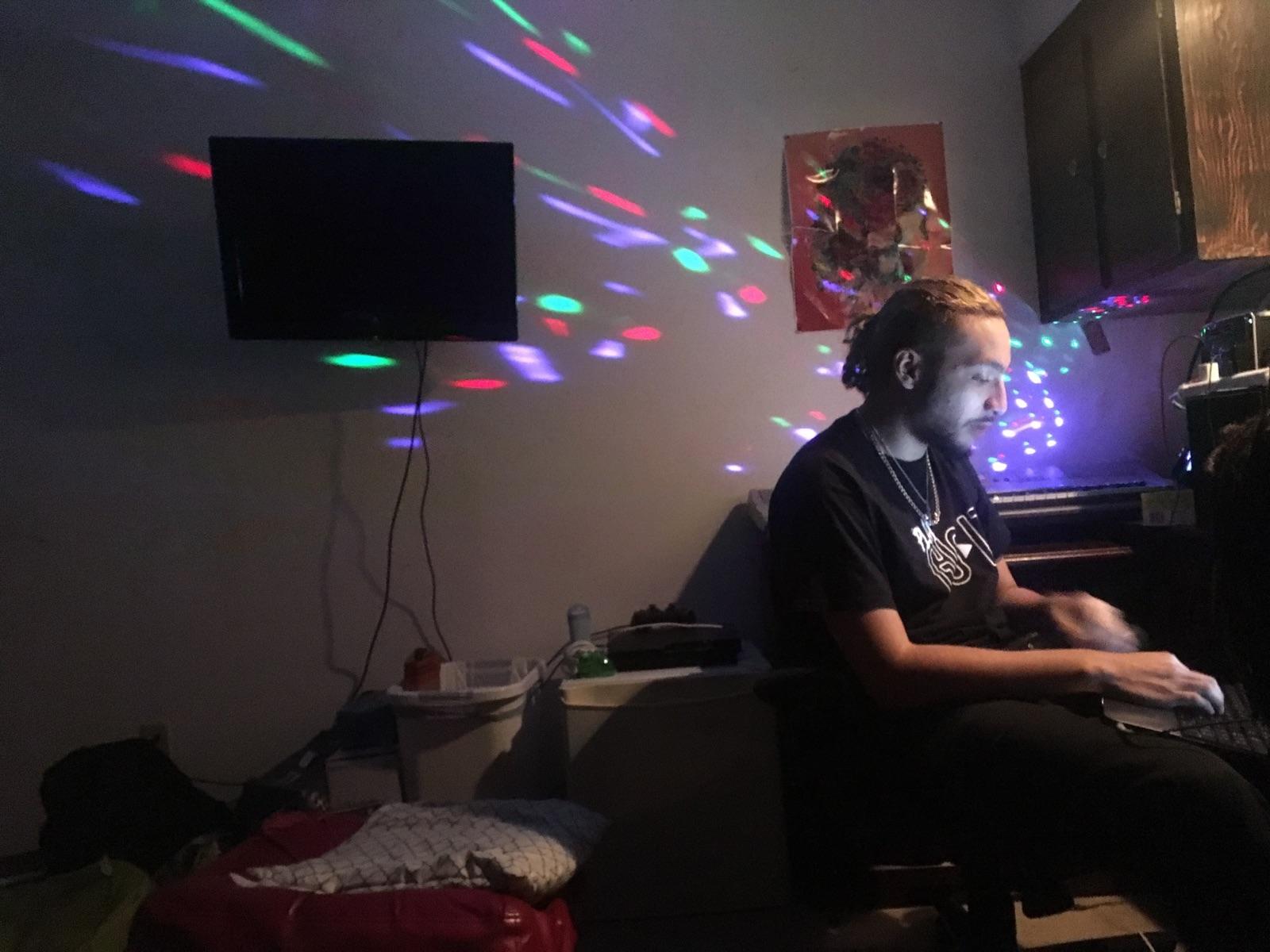 David Heath, senior at Omaha North, is making a name for himself, one more recognizable to the world. He is putting all of his past struggles behind him, and focusing on a life doing what he loves, making music.

Heath grew up in south Omaha, living with his parents in a small three bedroom apartment. He also had five other siblings with him, three brothers, and two sisters.

When Heath was about ten years old he and his family moved out of their south Omaha house. To what Heath called “the hood” which was about five blocks from Fontanelle Park.

His mom was a meth addict, and his father was a drug dealer through the gang he was in. They didn’t do a whole lot of caring for the kids.

“People would be shooting guns at night.” Heath said

The area was unsafe for him and his siblings to grow up. Along with that their home environment of gang and drug affiliation wasn’t any better.

When his father went to jail and they were left with no income and only the money from their father’s drug dealing, it was getting hard to live. Heath knew he had to do something for the sake of him and his siblings.

At just 12 years old, Heath was starting to talk to his mom about letting him and his siblings move somewhere safer, with or without her. It took over a year for him to convince his mother to finally give up the rights of all the kids, so that they could go live in a foster home.

When Heath and his family got to the foster home he met their foster dad Eric Payne, who they called Mr. Payne.

Heath was in and out of the foster home going to visit his parents and then coming back to the foster home. He did this for two years before his foster dad Mr. Payne legally adopted him at age 15

A woman in St. Louis decided to try and take in all of the kids to live with her. She ended up adopting all of the siblings except Heath.

“I thought that Mr. Payne would raise me to be a good man,” Heath said.

Things started to go in the wrong direction for Heath after he decided to stay.

“Once the others got adopted by someone else he really started to show how crazy he was,” Heath said.

Payne always had a list of chores for Heath, and it wasn’t much, just your average chores for a teenage kid. Taking out the trash, doing the dishes, the simple tasks.

Heath started to notice that the list was getting longer and longer every day. Payne was having Heath do chores all day long, this started Heath’s wondering.

The final alarm was when Payne started to label the food in the house. Heath could only have what was marked his, which was nothing sufficient to a healthy diet.

“I would have cans of tuna, and ramen noodles, and all sorts of cans that you can’t really, like, eat you know?” Heath said.

The food being of low quality, was also of low supply. Heath, eating what he could, would run out in no time. He had no choice but to sneak from Paynes, which had its consequences.

Heath needed an outlet, he was hungry, and getting in trouble a lot.

Heath at this time had a friend who he was really close with named Eliza. She really cares about Heath and his well-being.

After knowing about how Heath was being treated, Eliza invited him over for dinner one night. Heath asked Payne if it would be okay, and Mr. Payne allowed it.

It became more often that Heath was going to eat dinner at Eliza’s, it was almost every day. This made it so that Heath wouldn’t be home until late after school, around 6:00 pm.

Payne started to get upset with Heath coming home from school at a later time. He asked why Heath was coming home late and Heath reminded him about going to Eliza’s to eat.

Payne changed his mind, he no longer was okay with Heath going over there so often, but there was no food for Heath at home

“One day I went back over to Eliza’s anyways, I ate dinner, came home at six, and the doors were locked,” Heath said.

Payne had locked Heath out of the house. Heath had been asking for a key, and never had any luck with getting one.

Heath knew that Payne doesn’t get home until late around 10:30 pm. Heath decided he would just wait on the porch until Payne got home.

When Payne finally got back to the house Heath asked him why the door was locked, and Payne told him that he said to be home before 6:00 pm so he locked him out.

Heath figured if he would be locking the door to ask for the key again. Only this time, Payne told him no, because he wanted to be able to lock him out at his leisure.

Heath started to be locked out more often, it was a normal punishment, for any number of things, like sneaking his food, not doing a chore, or staying out at Eliza’s house.

It was getting to be a hassle, for everyone. Heath was sleeping on the porch, and staying at Eliza’s and other friend’s house.

Heaths girlfriend Suzanne at the time, was also letting him stay over just as often as Eliza. Her mom being a case worker, understood him needing a place to stay.

Finally, all the bad vibes and hassling for a place to stay caught up, and heaths girlfriends mom, said they were going to talk to Payne and finally resolve everything.

Heath, Eliza, Suzanne, and her mom Gloria, all went to Paynes house to meet and discuss as planned.

Payne let everyone into the living room to talk it out. Heaths girlfriends’ mom took the first step in saying that she knows about how things are going in the household, and that Heath had been talking about it for a while.

After all the points that were brought up by Gloria, Payne looked to Heath in shock, as if he had done nothing of the sorts. This made Heath nervous, Payne was lying through his teeth, and it made Heath nervous that she would buy into it.

Luckily, she told Payne that Heath was going to come with her, and that there was no choice. A weight was lifted when Heath heard her say it.

Payne let up, maintaining an attitude about it, making them leave. Heath asked if he could get all of his stuff from his room and what not. Payne wasn’t allowing it, he was eager to rid of them from his house.

Heath was upset but Gloria assured him that they would get it back but for now to just leave it be. It wasn’t until about two weeks later that Heath was able to retrieve his stuff, from the front yard, in trash bags.

Heath lived with Gloria and Suzanne for just less than a year. Suzanne and Heath broke up while he was living there still so it was tough to be around. After being broken up and still living there for a bit Heath was asked to find somewhere else to live.

By this time Heath has just turned 17 and moved out of his now ex-girlfriend’s house, and found himself with nowhere to live. Heath is now considered, homeless.

Since Heath left Gloria’s house, he has been going back and forth between friend’s houses. Asking to stay one night and then the next night somewhere else.

Heath spends the majority of his time now at Eliza’s house, making music with his group R0ach that consists of him, Eliza, and their friend Joel.

Before R0ach, Heath was a solo artist that goes by AMVlovesyou.

“I want to spread love through my music, I want everyone to feel love in the world.” Heath said.

Heath started making music on a laptop that he got for Christmas when he was 15. His idea of making music was conceived in a car ride, with Payne.

Dubstep was pretty popular in that time, and Heath would always play it in the car. So one day Heath was talking to Payne about how it would be cool to calm down the dubstep a little, and rap over it.

Payne told Heath that he should try and work on that. Sure enough Heath set his mind to it. Through everything that was going on in his life, any chance he got he was teaching himself how to make music, and making it.

Heath found a real passion with this, he fell in love, and making music was his escape. To Heath music is a way of expression, he can put emotions into music, and this allowed for his passion to grow.

He has taken his love for music and started paving his road to success. R0ach started playing opener shows, just playing some beats and keeping the crowd hyped.

When the crowd started to like the sound and get into R0ach’s music, Heath decided to talk to the show hosts about taking another step, and adding lyrics, rapping, for the crowd.

There’s a little business and numbers that go along with playing a show, and Heath has got it down, he’s looking into the profits, and expenses. As of now they aren’t profiting, but that isn’t bothering them.

R0ach is more about the music than it is about the money. Of course, Heath’s dreams are to get big, and share their music with the world, but he still wants to keep their original goal in mind, to spread love through music.

Heath has channeled all of his life experiences into music that he can express. His lyrics speak from his heart, he establishes a credibility by speaking through his own experiences and then speaks to the listeners about those experiences.

Heath is doing more with music than most people, he’s not just another “listen to my mixtape,” guy. He is following a passion, and turning his dreams into his reality. Despite all of the obstacles in his life, he has a clear path ahead of him, and his making something out of himself, and his passion.