Taylor supports herself, others in the fight against sickle cell disease 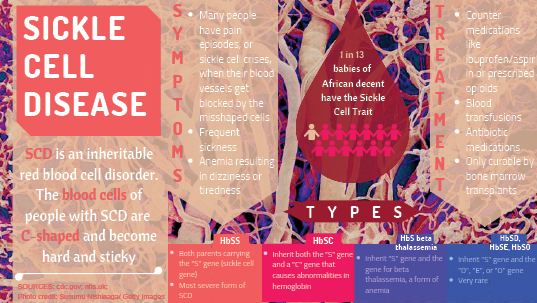 Sickle cell disease (SCD) occurs among one out of every 365 African-American babies according to the Center of Disease Control and Prevention. North high senior Alajah Taylor happens to be one of them.

“Two weeks after they had taken me home, the doctors had called my mom and said they had found something in my blood…they found out it was a sickle cell case,” Taylor said.

Both her parents are carriers of the sickle cell trait, due to this she inherited the actual disease. The disease skipped her brother’s generation, but there is still the possibility it may be passed on to his kids or grandkids.

Taylor has sickle cell anemia (SS) which is the most common type and severe of the types. Regular blood cells are circular but hers are shaped like a crescent moon. Due to the shape of her blood it doesn’t receive a lot of oxygen causing her to have severe pain, eventually making her body shut down.

Sickle cell makes it hard for her to breathe, also causing her to have a severe pain in her
limbs, back and chest. Her pain can be bad to the point that it causes her to be hospitalized. Taylor estimates that she has about six crises or episodes of severe pain a year where she must be hospitalized as our weather changes from hot to cold and vice versa.

While in the hospital she is hooked up to an IV and she receives fluids through the IV because she cannot process them orally. Pain medication is given to her during her visit. Also due to her muscles tightening up as she is in pain, she does physical therapy to loosen them up.

She participates in sports and clubs like track, drill team, and Black Student Leadership Council (BSLC) which also helps with her muscles because she is up and moving. By being up and moving her muscles don’t tighten up which makes sure that physical therapy isn’t a regular thing.

The biggest thing that gets in the way for her are her doctor appointments because she has so many. It affects her from participating in certain things at times. Taylor must see a doctor for her blood and a doctor for her bones to make sure that she is okay and doesn’t have more complications with her health.

“I think the main thing I had to accept was like I wasn’t going to have a regular lifestyle because technically there is no cure. So, from time to time I would get depressed because while I’m always at doctors’ appointments or in the hospital my friends are out and about. Even though they would take the time to come visit me it it’s just like I’m always missing out on stuff,” Taylor said.

When she is feeling down at times her family and friends become her biggest support system. Her friends may come visit to talk to her or bring her food at the hospital, they even may give her a pep talk for motivation. Whatever she is going through her family sort of goes through it with her in way because they “feel” her pain.

“I have a lot of friends that encourage me to keep going when I’m feeling down and out, they’re just there to support me,” Taylor said.

Her parents take priority in making sure their schedule fit around her appointments and hospital visits while still tending to their other responsibilities like her siblings.

Taylor has put an effort to help kids like her, by helping host BSLC’s Wakanda Ball in which the money that is raised goes towards treatment for sickle cell patients. She also goes to a sickle cell camp during the summer time to help the younger children with accepting sickle cell like she has.

“I know a lot of people they’re ashamed of it… but me I don’t really have no shame in it I embrace it, its who I am…I believe it actually made me a better person” Taylor said.

The main thing she tries to get through to the younger kids is that it “could be worse.”

“I try to help them understand it’s okay what you’re going through, but just think about it there’s someone else who’s doing worse than you…so be grateful where you are,” Taylor said.

Taylor expressed that when she is older, she does want to go into the health field. She wants to
become a hematologist which is someone who specializes in blood work with sickle cell.

“I want to help patients know I understand what you’re going through, because when I go deal with doctors it’s kind of hard for me to explain cause they don’t know exactly what I’m going through,” Taylor said.