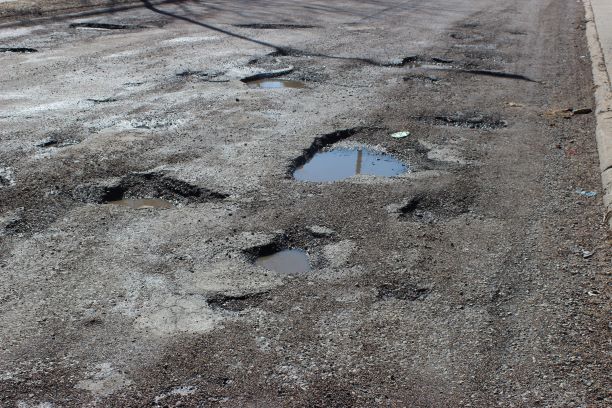 A cluster of potholes formed on 36th street just south of Ames. This section of the 36th is used by many student, parents, teachers and bus drivers to get in and out of the Omaha North High parking lot. Photo by Zach Hansen

Clunk, bang, and crash are just a few of the noises heard when going down Ames Avenue in North Omaha. While many roads are getting the necessary face lift, Ames has been left to suffer as the hard winter and lack of general maintenance creates pot hole after pot hole. The problems that are affecting the streets can only be chalked down as a combination of poor maintenance and poor planning.

Known in the City of Omaha Streets department as district three, North Omaha follow this same trend of terrible drives. The size of some pot holes have led to major damage to suspension systems for cars all over the metro.

Pot holes are created when the soil under pavement is weakened which is most commonly caused by the ice melting in the winter and spring. This water finds a way under the pavement and weakens the soil causing the pavement to be more susceptible to cracking and becoming a pothole. With the major amount of snow that built up throughout Omaha, the frequency and severity of potholes has ultimately increased.

Many people also question the lack of removal on days when the roads are at their worst. Any road that wasn’t plowed or salted instantly became an unfortunate drift track for unsuspecting drivers, additionally setting the foundation for potholes to form.

After the winter snow melted and went away so did any chance of having a smooth ride to and fro. With the arrival of spring more and more pot holes are emerging and most are too big to ride over. The pot holes seen in North Omaha and over most of the metro usually run deep enough to hurt after hitting them.

Problems from pot holes could be as minor as a small scuff on rims or as large as a broken piece of a suspension system. Problems like these could eventually affect and hurt the way your car operates and require you to have it serviced. The average cost of suspension work can be between 1,000 and 5,000 dollars depending on the make and model of the car.

The havoc pot holes can wreak on your car by damaging your wheels, tires, or much worse your suspension system. According to Your Mechanic, an on the go mechanic service, the average price per person is $300 to fix pot hole related damage, they also say that it costs the entire country $3 billion.